What does what you say about your business say to your customers? Can they read the writing on the wall?  If customers can’t quickly understand just what you are offering them, it’s likely you may never get the chance. No matter what your business  is or how big or how small, the way you tell your story is  key to success. END_OF_DOCUMENT_TOKEN_TO_BE_REPLACED

A TV commercial came out when I was in elementary school that I remember to this day. We lived in a different time.  The 1960’s had ended and we were at the start of a new decade.  It was 1971.  People were protesting the war (in Vietnam this time).  Richard Nixon was President, Chairman Mao had declared the Cultural Revolution was ended (1969) and the door to China was slowly opening to the West. New technologies in semiconductor science and computing were evolving and a new environmental movement via Greenpeace was born.

A commercial came out in the fall of 1971 that captured the people’s mood and helped embed a brand – Coca-Cola – in the hearts and minds of a generation. (See video from YouTube above.)   The story of the how the now famous “Hilltop” ad came to be is a good one and a legend in the ad industry.  Two top 20 Hits came out after the commercial, one by The Hillside Singers and the other later by the New Seekers.  You can hear and see their version here. 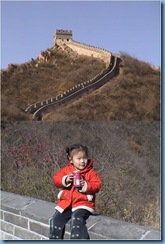 Fast forward 30 years – and my husband Chris and I were in China seeing the sights.  It was just weeks after 9-11 and the world was still reeling in shock.  It was not a time of global love and trust.  One sunny morning, we made a visit to the Great Wall of China.  As we made our way up the wall, I watched a man helping a little girl climb step by step.  We stopped, as they did, along the way to take a break.  I took a Coke out of my backpack and caught the Dad’s eye and pointed at his little girl.  After he nodded yes, I turned to offer it to her.  She did not speak English, but her eyes lit up as she giggled and sang out “Coca-Cola!”  Perhaps they did teach the world to sing after all.

How will you build your brand?

Most of us can not afford the $250K Coca-Cola spent just to create the famous ad in 1971. (That’s $1.3M+ in 2009 dollars and without airtime!)  But, that’s OK.  You see, they learned the most important secret of business growth and branding.

It’s not what you say about your company that matters.  What matters is what others say about you.  Especially in times like these – times of challenge and change -actions speak louder than words.

It does not matter how big or small your company is.  Your decisions can make or break your brand.   The next time you have a business decision to make – ask yourself, “How will others see this – and what will THEY remember?”

People have long memories, and you never know who might be writing about YOU thirty days or thirty years from now.