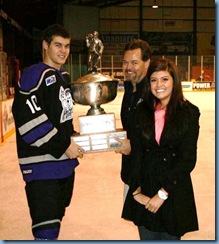 If you have been following this blog over the past few months, you know that there have been some big changes since December and there are lots of exciting games in play.

On a personal note, my son Chris returned from Canada in December where he had been playing in the BCHL.  I wondered for a moment if my days as a hockey mom were over.  The next thing I knew, Chris was rejoining his former team, the Phoenix Polar Bears, as they skated their way to another Western Division Championship, made USA Hockey history when they locked in an Eighth Straight National Championship berth, and this weekend won the WSHL Thorne Cup Trophy.  The National Championships are the last weekend in March.  Stay Tuned.

On a business note, I left ASBA at the end of my contract in December 2008 to explore new opportunities and devote more time to my duties as a board member and treasurer for Ribomed Biotechnologies, Inc.  As my journey progressed, I have seen some incredible companies, found some incredible opportunities, pursued a ‘really cool deal’, made some great new contacts in the world of business, been actively raising capital, and learned a lot along the way!

My ‘really cool deal’ was an exciting roller coaster ride.

Oh, no! you might be thinking, All that work and it did not happen.  Well, of course it was disappointing to lose the deal, but learning what I did alone the way is a BIG Win.

Here is what I learned:

1.  If you have a solid deal with good fundamentals – there is money out there to fund it. AND,  YOU CAN GET IT!

3. People want and need to hear POSTIVE business messages right now.  That’s why over 1,000 people like you are reading this blog.  And that’s why I make the time  to write it.

4.  That I may have lost this ‘really cool deal’ but a better opportunity is waiting just around the corner.  You may not win every game, but with each new game and each new play, you have the opportunity for a break-away goal.   Stay tuned…