In the United States, we have two “perfect problems”: our Healthcare system and our Taxation system. What makes these problems perfect is their absolute complexity and an almost universal agreement that a problem exists.

The focus of this article is on healthcare.  I’ll leave taxation for another day – even though eventually our country will not be able to truly address one without the other.

Up until December of 2006, I did not think a lot about healthcare.  It was something I had, something I paid for, and with the exception of annual check ups for my family, something that I rarely had to use.  I knew it was a problem, but it was not necessarily mine. That changed December 21, 2006 when I became the CEO of the Arizona Small Business Association, and had to answer to and speak on behalf of our 3,000 business members and through them over 200,000 employees.

The more I researched, surveyed, and listened; the bigger the problem became.  And I was just looking at one state, and within that, only one subset of the population, small business owners and their employees.  Yet both in our state and on a nationwide basis estimates from both the Federal government and independent agencies estimated that of the 45 million people plus who lacked health insurance, approximately 60% of them either owned or worked in a small business.   The constantly rising cost of health care was a burden these businesses were struggling to battle.  Others were starting to give up hope that anything could be done.

LOOKING AT THE NUMBERS:  HEALTH INSURANCE COVERAGE IN THE UNITED STATES 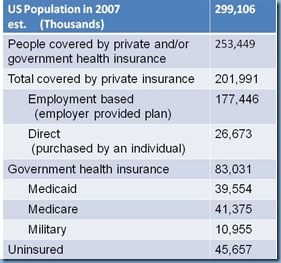 The chart at right shows the estimated U.S. population (as of 2007) and the breakdown of the insured/uninsured and where the insurance comes from.

But as we all know, there have been some pretty significant economic factors since 2007 that probably shift these numbers upward in the areas of both government provided program and the uninsured due to the significant change in the unemployment rate (4.7% in June of 2007 vs. 9.7% in June 2009) and the continuing economic pressures on businesses of every size.

With a problem this large, it’s hard to have any impact.  Especially when it’s also highly complex and politically charged.  At the state level we had various mandates, imposed and proposed, that were continually driving the costs up.  A state provided program for small business had serious limitations and flaws not to to mention a serious deficit that threatened its sustainability.  The whole thing was a mess.

I had learned a long time ago that it is almost impossible to tackle a really big complex problem – but that if you break it into little ones and tackle them one at a time, you can make headway.  So that is what we did.

First we framed the problem with a set of goals.  Our conditions for success were the following:

The next step was to look at what resources we had to work with and to identify potential partners.  We reached out to corporate partners, legislators, the Governor’s office, and national organizations to see what was available, what we could work with or what we could change.  Through a combination of negotiations, partnerships, and collaborations, we were able to design a plan that met all five of our defined goals and launched it 10 months after we started the process.  To see the full details of the program, visit the ASBA website.

Now, this program did not solve the national problem, but it did provide a solution/option for the community we served across the state of Arizona. AND, it did so without a single taxpayer dollar.  Best of all,  from 2007 to 2009 the gross increase in premium was a total of THREE percent while at the same time the program benefits were enhanced – not reduced.

So my question is this.  Perhaps, while they battle in Washington tackle the perfect problem of Healthcare Reform – and fight over every sacred cow.  Maybe, just maybe, individuals like you and me, in our little corners of the country can build viable solutions by breaking the problem down to smaller more manageable chunks and tackling them one at a time.  That way WE can solve the problem and THEY can keep on talking.

P.S. While I no longer serve as the CEO of the Arizona Small Business Association, my time there taught me something very important.  There is very little that can not be accomplished by American small business with a little hard work. collaboration, and ingenuity.  If we focus on the challenge, frame it properly and get down to work the results can be pretty incredible.

Posted in Blog, Getting Back to Basics, Innovation, Leadership, Real World Inspiration and tagged Affordable Care Act, healthcare, Healthcare Solutions.
This website uses cookies to improve your experience. We'll assume you're ok with this, but you can opt-out if you wish.Accept Read More
Privacy & Cookies Policy