People you will hear from at AZEC10 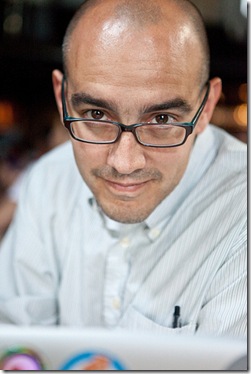 One man in Silicon Valley is trying to turn  the venture capital industry on its head — by going outside Silicon Valley. Dave McClure, founder of the new SuperAngel/VC fund 500 Startups, travels all over the world looking for ideas and deals. Not only that, but he will do a deal with anyone who pitches him a good idea.
We are fortunate to have Dave coming to Arizona for AZEC10 on Nov.17.
How does he know when he sees a good idea? Well, it’s his history and experience that give him the edge. He’s been in Silicon Valley for twenty years. He was director of Marketing for Paypal in 2004 when it was acquired by EBay.  He has taught a class on Facebook at Stanford. He managed the fund created by Accel Partners, Facebook, and Founders Fund  to incubate Facebook applications. For the past half dozen years, he’s been an active angel investor.

Dave sees the entire geek world, no matter what continent it is on. And I mean up close and in person.  A few years ago, he organized a series of trip so called Geeks on a Plane, through which American geeks visit other cities and countries and Dave gets to meet not only them, but the geeks at the destinations. He does this by volunteering to speak at tech conferences. I went with him to China, Korea, and Singapore this past spring, and in two weeks we went to four cities in three countries, attending six conferences for startups and web technology. He has also taken trips to Washington DC to lobby for better immigration policies and to Hawaii to “Re-Think Hawaii.” Next year, he plans some new continents. 🙂 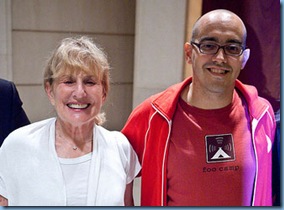 In Silicon Valley, he organized Startup2Startup, a monthly dinner where entrepreneurs hear from one of their own. And he’s active in a program that’s trying to get the visa rules changed for non-natives who come to the US for an education and would like to stay here to start companies.

As a champion of the “Lean Startup,” a concept that involves getting the product out to the market as quickly as possible to get feedback, iterate, optimize, and get more feedback, McClure is trying to convince engineers to design products quickly, and move on from their failures. It’s a loop, Dave says. He’s all for killing features that “suck,” and keeping what works.

To that end, he’s now going around the world looking for his 500 Startups, to each of whom he gives a small amount of funding to get the loop going. This goes against traditional venture capital models, which typically make larger investments in fewer companies later in their development cycles. But it appears that, in the current age of apps, the ordinary VCs can’t find the right deals for their huge funds. McClure, flying to Asia, holding his dinners, speaking at entrepreneurship conferences in Arizona, and talking about Startup Metrics for Pirates, is sneaking in right between the legs of the most towering VC names.

Francine Hardaway, PhD, OTEF executive director, co-founder of AZEC, OTEF and Stealthmode Partners has been an entrepreneurial and social venture catalyst for over 30 years.  She spends her time between Phoenix, the Silicon Valley and London and where ever she goes, you can be sure that she is on the look out for the next great innovation.  To connect with Francine, follow her on Twitter @Hardaway or via Google Voice at 816-WRITTEN (9748836)

Thanks for stopping by.  Stay tuned… there will be more entrepreneurial profiles and AZEC10 behind the scenes glimpses between now and AZEC10 on 11/17/2010.

Note:  Joan Koerber Walker serves as Chairman of the Board of The Opportunity Through Entrepreneurship foundation,which is the host organization and sole beneficiary of AZEC10.  To learn more about OTEF, visit www.otef.org.

Technorati Tags: AZEC10,Arizona Entrepreneurship Conference,Dave McClure,Geeks on a Plan,Venture Capital,Kris Krug,Francine Hardaway,Joan Koerber-Walker,OTEF,Opportunity Through Entrepreneurship Foundation
Posted in News.
This website uses cookies to improve your experience. We'll assume you're ok with this, but you can opt-out if you wish.Accept Read More
Privacy & Cookies Policy