Today was a momentous day – the official announcement of GM’s historic bankruptcy.  It’s been covered by every imaginable news medium from print, to air, to online.  Articles and bit.ly links propagated across twitter.  A quick search on Google brought back a staggering reply”  “Results 1 – 10 of about 3,370,000 for “gm+bankruptcy“.   You see, for me, GM was more than just a car company.  It has been an integral part of family conversations all of my life. 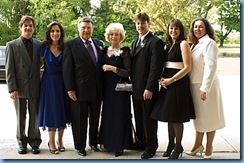 When I was a child, GM meant Gonna Move.  My Dad worked for Buick Motor Division, and in those days you moved – a lot.  During the first 6 years of my life we lived in 6 different places.  One of the first songs I learned was a jingle. “Wouldn’t you really rather have a Buick?”

I remember going with my Dad to dealership grand openings or to visit dealers during Christmas vacation. (I wonder today if some of those dealers are on the list of over 2,600 that will get a call in the next few days telling them that their family business is no more. )

My Dad’s job at GM allowed him to support our family.  He worked hard and was proud of what he did and the company he worked at for over 40 years.  He invested what he earned in a home, what his family needed, and in helping his children through college.

Out of the five kids, three of us worked at GM  at one time or another.  I was the short timer – spending a summer at the plant in Wilmington painting Chevettes while studying economics at the University of Delaware.   (That’s me in white at the far right of the family picture.)  My brother Rick and sister Susan (standing between me and my Mom) have spent  their entire careers at GM.  Rick as a member of the UAW in the Wilmington plant while Susan followed Dad into the management side.  Rick was planning to celebrate his 30th anniversary with the company this year.  I wonder what will happen now that it has been announced that his plant will close in July.  Susan is out in Michigan this week.  She and other GM mangers will be speaking to the many dealers across the country and helping them understand how these changes affect them.   And Dad?  Well, as a retired management employee, he lost his health insurance benefits earlier this year and now wonders what will happen with his pension.

As I was listening to President Obama announce the bankruptcy of GM to the world live, I was reading an article in the New York Times that said ”

“And now it (GM) is filing for bankruptcy, something that would have been unfathomable even a few years ago, much less decades ago, when it was a dominant force in the American economy.”

Maybe, maybe not.  For me, GM was not a career, just a summer job.  Even in college, my focus was innovation and growth.  As an economics major in 1981, my senior thesis paper was titled – Industry in Crisis – the affects of government intervention on the U.S. Auto Industry.  I chose not to follow Daddy into GM, but rather to pursue a career in the then fledgling technology industry.  (It’s a bit ironic.  GM leaves the Dow with this bankruptcy filing to be replaced by Cisco on June 8th.  DeVry a school know for technology, will take its place on the S&P.)

Almost two decades later, while in graduate school, I recall listening to my finance professors warn of two impending crises.  One, the Dot.com Bubble, was to implode a short time later.  The second – GM’s bankruptcy due to the constant escalation of its employee and pension obligation was temporarily averted by selling bonds and shifting investments in EDS and later Hughes into the under-funded pension trust.

So no, maybe we should not have been taken by surprise. GM’s foundation has had serious cracks for a while.  When the global credit markets collapsed, the challenges it faced were akin to a building with a cracked foundation that is rattled

The world is watching, and I expect that there will be some really interesting family discussions when all of us come together for my parent’s 50th wedding anniversary on August 1st.  As we gather round the piano in my family’s Rochester, Michigan home to sing the old tunes, I am not expecting to hear the sweet refrains of “Wouldn’t you really rather have a Buick” but then you never know.

Thanks for stopping by – Stay Tuned…