We live in times of change.  In good times and in bad, change is the one true constant.  But in any era and any economy, there are some  human characteristics that, when we hold true to them, form a solid foundation that we can build on.

Business challenges fill the Twitter streams, the papers and the airwaves today along with the fears these changes bring to the people living through them.

As I read about and experience the changes of our times, I draw on the lessons my grandparents taught me in times long past.

The first lesson was learned from my Grandpa Carmichael when I was probably about five years old.  We were looking at a picture book and I asked him what a word  meant.  He took me by the hand, walked me down to his home office, and pulled a Webster’s dictionary from the shelf.  Opening the book, he said “let’s look it up and then we can talk about it.”  And so we did.  The word that day was dromedary.  A bit easier to define than complex issues like ethics, integrity, and leadership.  But the lesson still holds. 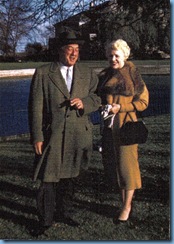 Later that evening, we visited my other grandparents at their home on Port Drive in Detroit.   Sitting in Grandpa Koerber’s lap,  I held out my favoite picture book.  Pointing to the picture, I asked.  “Grandpa – what’s this?” “A camel” he told me.  “No Grandpa, it’s a dromedary – see only one hump.”  “Why you are right, Miss Smarty Pants, it is a dromedary after all.”

Grandma told me, a few years later when we went back for his funeral, that Grandpa told that story to all his friends.  He would laugh and brag about how amazed he was to be learning lessons about dromedaries from a five year old girl.  But what stuck with me from that long ago night was what both Grandma and Grandpa had explained to me.  “It’s not just what you know that is important.  It’s what you do  with it.”

So as we look at the definitions above, we know what the words mean.  The question is not what we know – but what we do with it.

As I look at the definitions above and think about my own experiences and what’s changing in the world around me, I still draw on the skills my grandparents taught me.

Studying the the words, as defined by Merriam-Webster, a definite and interrelated pattern emerges that allows me to synthesize my own understanding and beliefs.

Ethics becomes simply knowing what is right.  Integrity is the act of then doing what is right – even when it is inconvenient or uncomfortable.   Thus, leadership is taking the personal responsibility to step out in front while basing your decisions on your own ethics and integrity as you move forward.

My grandparents must have also known this.  For during their lives, each was a living example.  They taught these values to their children and their grandchildren. Just as I am trying to pass them on to mine.   I guess some things don’t change that much after all.