Innovation – doing something in a new way to make life better for the people who matter – is a wonderful thing – unless you happen to be the one who missed the train when it pulled out from the station. 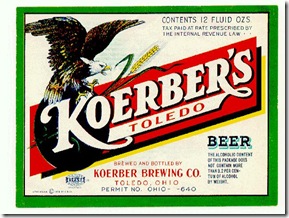 That’s what happened to a once great family business, Koerber’s Beer.

Hey – you may be thinking – that name sounds familiar.  Yes, Koerber’s was once our family business run by my grandfather William G. (Bill) Koerber and his brothers.

Koerber’s Beer and the other brands, including Friar’s Ale and later a new innovation, Malt Liquor led the brand portfolio.

The family business managed to survive through two World Wars, Prohibition, and the Great Depression.  Instead, it was an innovation in the brew master’s art that led to it’s demise.

That change was the 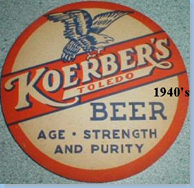 practice of increasing the preservative content in beer and ale.  By adding additional preservatives, competing breweries were able to ship their beers for greater distances, store the product for longer periods of time, and increase shelf life for distributors and retailers taking advantage of major economies of scale.

There was only one problem, it affected the taste of the beer.  Koerber’s brand was associated with Age, Strength, and Purity.  Grandpa, as brew master was sure that no one would buy let alone want to drink the lesser product.   And Grandpa was wrong!

By 1949, the last bottle of Koerber’s beer was crated and shipped from the plant in  Toledo, Ohio.  The factory was closed.  What today we would call a series of micro breweries, Koerber’s, and it’s sister company Grand Valley Brewing could not compete with the mega brewers who had emerged.

By the time I came along, in 1960, the only Koerber’s beer that was still in production came from the mini brewery that was hidden behind the secret wall in the Dutch Room off the boat well in Grandpa’s home at Grayhaven on the Detroit River. But that’s a story for another day.

So when you hear the whistle blow and see the innovation train pull into the  station, be sure to have your ticket ready so you can board.  You don’t want to be left behind!