As innovators, one of the most frustrating phrases we hear is “if it’s not broke, don’t fix it.”  Yet, equally dangerous is the ongoing cycle of Band-Aids and patches we often put on existing processes and procedures to “fix” them.  At some point there is always a diminishing level of benefit until it is so complicated and complex that you need to say “enough!” It is time to scrap the whole mess and start over.  Any software developer can tell you that this is the case when it comes to  writing code. Business leaders will tell you the key to business process optimization is simplification.  But when it comes to government we have yet to learn the lesson.

A case in point is the current system of taxation in the U.S. both at the Federal and the state level.  With over 20 volumes and over 3500 pages when you combine the actual tax laws and the resulting tax regulations, is it any surprise the people get confused.  Even Treasury Secretary Timothy Geithner, who is now responsible for the IRS, has had his challenges.  Listen in to this YouTube Video see what I mean.

The Code of Federal Regulations a.k.a The Tax Code is incredibly expensive to comply with.  It is estimated that Americans spend $225 billion each year in tax compliance and the Federal governments spends billions (see chart below) to collect, manage, enforce, and educate taxpayers every year.  The IRS Oversight Board recommends a fiscal year (FY) 2011 Internal Revenue Service (IRS) budget of $12.914 billion, an increase of $767.7 million over the enacted IRS FY2010 budget of $12.146 billion. 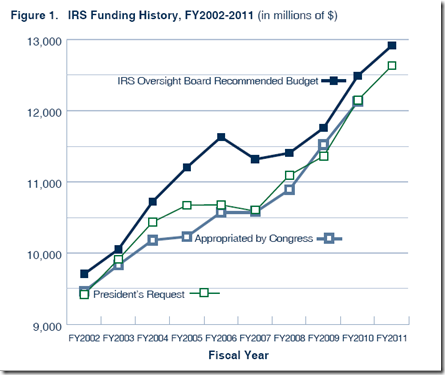 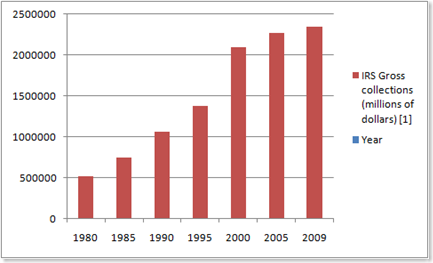 One possible option to start over – The Fair Tax.

A 23-percent, single rate, national retail sales tax, the Fair Tax will be applied to the sale of all consumer goods and services at the final point of consumption. This way, every taxpayer will be subject to the same tax rate with no exceptions and no exclusions. Those who are least able to share in the cost of government will bear no burden at all. Tax rates will depend on the amount of purchases made. Used items will not be taxed, which promotes reutilization. Business-to-business purchases for the production of goods and services will not be taxed. In addition, the Fair Tax will replace the individual federal income tax, the capital gains tax, all payroll taxes, corporate income taxes, the self-employment tax and the estate and gift taxes. (Source: NSBA – http://www.nsba.biz/fairtax.shtml )

Implementing something like the Fair Tax is not a Band-Aid or an overnight fix.  It is estimated would take close to  two  years to put the various support levels in place and then wind things down.  But equally important, once this is done, it is estimated that the cost of citizen and corporate compliance would drop from $225 Billion to approximately $10 Billion.  That’s a lot of dollars that can be put to more productive use in our economy.

The Fair Tax is not a new idea but perhaps it is an idea whose time has come.  It certainly could not be worse that the tangled web of laws, rules and regulations our tax code has become.