I was scanning some articles online this morning when I cam across a fun one at How Stuff Works titled 23 Must-Have Toys from the 1950s and Beyond.  So I decided to check it out.  Of the 23 ‘must haves’, only Strawberry Shortcake never made it into either my or my children’s toy collection.  But it was the Cabbage Patch Kids that brought back the memory of how one innovative toy really drew a crowd. 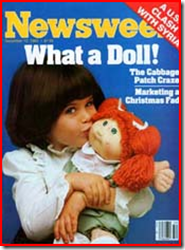 Xavier Roberts was a teenager when he launched his Babyland General Hospital during the 1970s in Cleveland, Georgia, allowing children to adopt a “baby.” In 1983, the Coleco toy company started mass-producing these dolls as Cabbage Patch Kids. Each “kid” came with a unique name and a set of adoption papers, and stores couldn’t keep them on the shelves, selling more than three million of the dolls in the first year.

It was just before the Christmas holidays in 1983, and my fiance Chris worked at Coleco, home of the Cabbage Patch.  EVERYONE was trying to get their hands on the little darlings – even employees.  The company had to even hold a lottery for employees to be able to purchase them.  So after months of lotteries, we had a small collection of six Cabbage Patch Kids ready for adoption.

I really did not give it too much thought when I lined up the ‘Kids’ on the back seat of my car and left my home in South Windsor, Connecticut on a Saturday afternoon to drive down to see our families in Danbury, Connecticut.  But I got a real lesson on what it is like for an innovation to draw a crowd when I stopped at a McDonald’s along the way to get a Diet Coke.  The young girl at the drive thru window saw into my back seat, and exclaimed!

WOW!  Where did you get all those Cabbage Patch Dolls!

That’s all it took.  Before I had even been given my cup, my car was surrounded by Moms, wallets and checkbooks in hand, asking me what it would take to sell them “Just One.”  I explained that they were gifts and that they were not for sale, but finally the manager had to come out and move the eager Mommies away – before I could put my car in gear and make my escape from the drive thru.  I learned a lesson that day…

When an innovation capture’s the public’s imagination – it draws a crowd.

Over twenty-five years have passed and I have seen many innovative new products come and go.  Some are just a passing fad, but others have real staying power.  As an investor, I look for those companies with inventions or solutions that can make life better in one way or another.  Products or services that capture the imagination and can, with the right resources, literally draw a crowd in their chosen marketplace.

Some of these companies have been in technology – like when Bernie Vonderschmidt, the first Chairman and CEO  of Xilinx, shared his vision of the next generation in silicon technology,the FGPGA, or when Dr. Michelle Hanna of RiboMed helped me to imagine a day when we could detect and treat diseases like cancer BEFORE it was too late and our loved ones were suffering.  Others have not.  But none of the innovations I have invested in have been toys.  Perhaps because I never got over the experience of being ‘mobbed by Mommies’ at McDonalds.